Here is the story of my life as a consumer:

Buy something, become obsessed with it for a few weeks, buy something new, immediately forget the old.

That doesn’t really work when I have no job so I’ve been forced to get creative. Now when it comes to purses and wallets- since its something I use every day, I seem to tire of them extra quickly. Occasionally I delve into the box of forgotten purses to take a trip down memory lane and see if there is anything I could be wearing right now. I came up with this gem.. I bought it a few years ago and used it as a wallet (everyone thought that was weird..) because at the time I was taking public transit to my job where I made 7.80 an hour (super fun times). Anyways, I was always carrying a huge bag of stuff with me; work lunches, water bottle, change of shoes, book etc. It got annoying trying to find a small wallet in there, and having to switch my stuff out of my work bag if I wanted to go out so I started carrying this clutch with everything I needed, so that I could just take it out and go. And it worked awesome, so eff the haterz/ 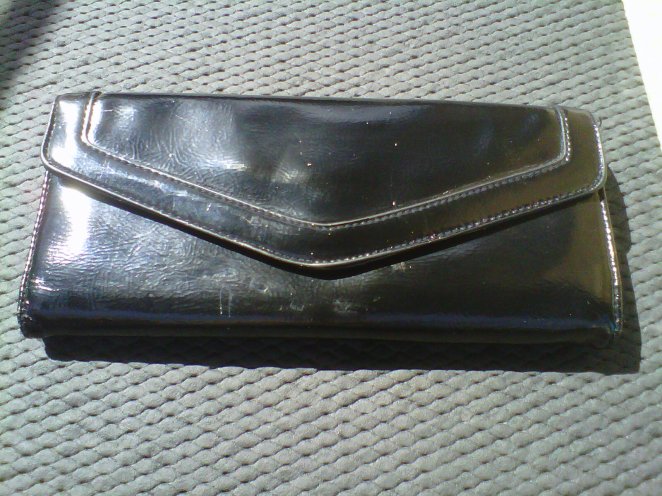 here it is in all its glory BEFORE

THE FINAL PRODUCT & HOW I MADE IT:

HALF WAY THROUGH THE MAKEOVER…

above: the materials i used- purse with paint drying after a few coats. gold sparkles still are unsealed.

I'd love your thoughts... Cancel reply

IN MY OWN WORLD